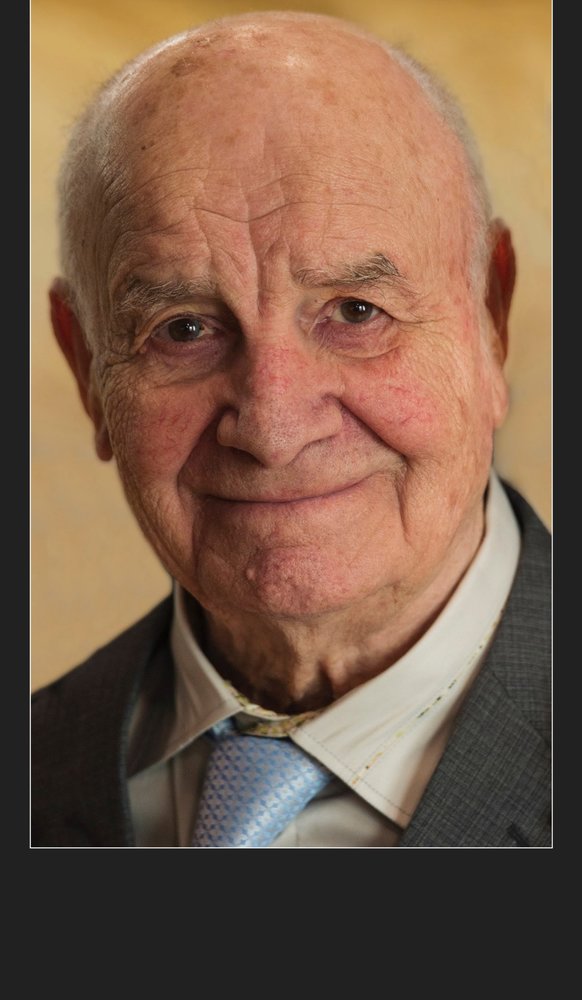 Please share a memory of Bill to include in a keepsake book for family and friends.
View Tribute Book
December 5, 1931 – November 30, 2020 Bill Yerema passed away peacefully at Lakeridge Health Centre in Port Perry on November 30th approaching his 89th year of life. Extraordinary Host (pig-roasts, family reunions, pool openings and Ukrainian Christmas celebrations), Golf, Hockey, Baseball, Curling, Bowling, Lawn Darts and Badminton Player (Saskatchewan Roughriders and Leafs fan, and the best coach ever), Caring and Committed Teacher (aka Curly Bill), Exceptional Chef (lazy-man’s cabbage rolls and borscht), Part-Time Gardener (tomatoes, weeds, cucumbers for the best garlic dills), Reluctant Patron of the Arts (stonettes, antiques, apple frames, the Magic Door and other million dollar ideas), Forager (morels,chokecherries blueberries and dandelions), Tireless Entrepreneur (The Glass Window, Sunderland Swimpool Service and the Beale Block Building), Late Night Comedian (with Ray Lane and company), Midnight Musician (fireside guitar, five chords, gut-buckets, Country Roads and the band -- Ten-Buck Terry &amp; the Brothers) as well as an Industrial Artisan (woodworker, renovator, welder and inventor). Bill was a strong, but gentle man and his kindness, generosity, sense of humour and hospitality created lasting memories for many, many people over the years. He will be dearly missed by all who knew and loved him. Bill was predeceased by his siblings: Anne Shinkewski, Irene Skoretz, Peter Yerema and Terry Yerema. He is lovingly remembered by his wife of 61 years, Joan Kedey Yerema and his four children: Susan Yerema (Bob Ward), Jay Yerema Weafer (RobWeafer), Shane Yerema (Colleen Jordan) and Richard Yerema (Sheryl Bunting); beloved Gido to his grandchildren: Davis, Jacob, Isaac, Jason, Julia, Jesse, Brittany, Amber, Owen, Abbey, Keagan and Garnet; great grandchildren: Logan, Harper, Nash, Olive and Ford. Bill will also be missed by his sister-in-law Betty Lane and brother-in-law Hugh Kedey (Eveline) as well as numerous nieces and nephews. Private arrangements have been entrusted to the Thorne Funeral Home, 109 Laidlaw Street South in Cannington (705) 432-2672. A Celebration of Life will be planned in spring/summer. In lieu of flowers, the family suggests a memorial donation to a charity of choice or an unexpected, unsolicited act of kindness for another in his name. Memories, photos and condolences may be shared at www.thornefuneralhome.ca MORE DETAILS ABOUT BILL’S LIFE: Bill was born on December 5th, 1931 and raised on the family homestead near Buchanan, Saskatchewan. He was one of the five children born to Dmytro and Maria (Palchewich) Yerema who had immigrated to Canada from Ukraine in the late 1920’s. Bill received his early education at Bellenden School and Buchanan High School before moving to Saskatoon to attend Nutana Collegiate and Teacher’s College. He began his professional career teaching all grades in a one-room schoolhouse, known as Main Road Public School near Rama, Saskatchewan, and continued to help on the family farm during the summer. Eventually, he resigned from his teaching position to join his brother Peter and later Terry in Prince Rupert, British Columbia. Bill initially worked for the Canadian National Railway and later became a technician in the Control Lab at the Columbia Cellulose Company, as well as a part-time taxi-driver and bartender. In 1955, while driving near the Nurses’ Residence, Bill spotted a “little red head” and liked what he saw so much that he asked his friend to arrange a blind date to meet her. When Bill met Joan Kedey, the attraction was immediate and mutual, but both would often say that they actually fell in love on the dancefloor. On April 10th, 1959 Bill and Joan were married in Prince Rupert, British Columbia. When Joan became pregnant with their first child, they made the decision to move east to be closer to Joan’s family and soon after Bill resumed his teaching career at R.L. Beattie Public School in Sudbury, Ontario. Bill continued to teach various grades while pursuing his Industrial Arts Specialist Teaching Certificate during the summer months through the Ontario College of Education in Toronto. In 1965, Bill was hired by the Principal Stanley J.W. Rickard to teach Industrial Arts (“shop”) at Brock High School in Cannington, Ontario and he was soon promoted to a Department Head. Bill was an inspiring and much-loved teacher who was dedicated to his students’ success. He taught at Brock H.S. for over 20 years until his retirement in 1987. Bill and Joan’s beautiful home in Sunderland, Ontario was the perfect place to raise their four children and it soon became an infamous gathering place where family and friends were always welcomed. Bill’s pig roasts and annual pool openings were legendary for the food, fun and music. He was involved in the community and his entrepreneurial spirit manifested itself through a few side businesses including real estate investments that provided rental properties for many local families and businesses over the years. Bill always maintained a large garden where he grew the cucumbers that ultimately were transformed into the world’s best dill pickles. He was a great cook, enjoyed playing the guitar and was a natural athlete who played baseball, hockey, badminton, tennis curling, bowling and loved a great round of golf. The importance of family was always paramount to Bill, so every summer he would return home to Saskatchewan with Joan and children to visit his brothers, sisters, and their families. After retirement, he continued to instill this important value by spending lots of time with his adult children, grandchildren and great-grandchildren. Together with Joan, they travelled throughout Canada, U.S.A., Europe and loved their annual trip to Aruba. Bill understood the extraordinary beauty of the human heart and truly cherished his family and many friends. He was a great role model who always lived life to the fullest and faced challenges with courage and determination. He will forever be in our hearts.