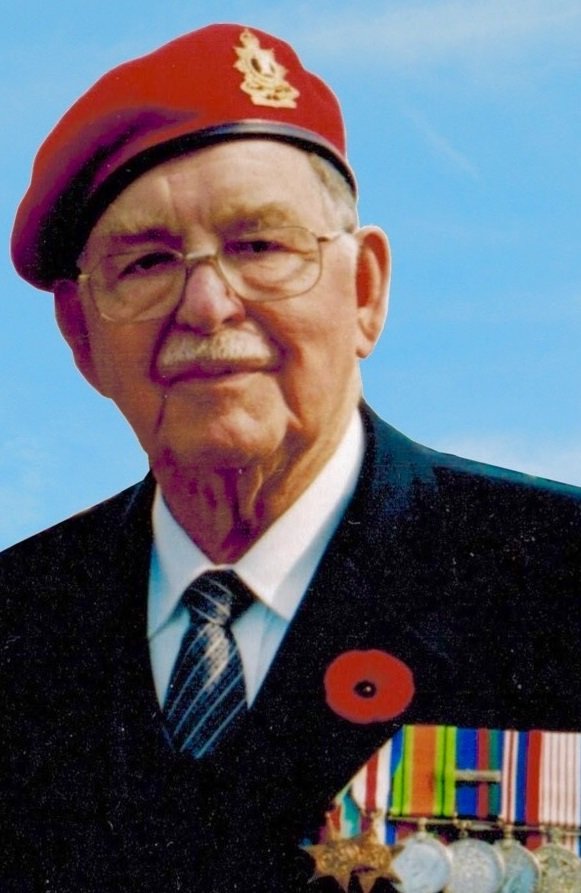 Please share a memory of Allan to include in a keepsake book for family and friends.
View Tribute Book

Born in Toronto, Ontario, on April 7, 1923, to Donald C. McPhail and Lilian A. Oliver, he was the oldest of eight siblings. Allan’s early years were spent in Toronto where he attended General Mercer P.S. and Western Technical School.

In 1940, Allan joined the non-permanent active militia, 2nd Battalion Irish Regiment of Canada. He enlisted with the Royal Canadian Artillery in 1941 serving with the 8th Heavy Anti-Aircraft Battery (1941-43), and transferred to the Royal Regiment of Canada (1943-45). In July 1944, during the D-Day invasion, Allan was wounded at Louvigny, France. Later he served in the liberation of Holland and was wounded outside Xantan, Germany in March 1945. For his military services, Allan received the 1939-45 Star, France and Germany Star, Defence Medal, Canadian Volunteer Service Medal with Clasp, and War Medal 1939-45. In 2016, he received the Knight of the French National Order of the Legion of Honour.

In 1947, Allan married Marian Avis. They moved to Cannington in 1953 when he started teaching at Brock District High School, later becoming vice-principal. Always community minded, Allan worked with many local organizations including the Cannington Minor Hockey Association, the Cannington Lion’s Club, Legion and Historical Society, the Brock Township Library Board and Hydro-Commission, Brock Community Health Centre, the Durham Police Commission and the Victoria County Children’s Aid Society. In 2013, he was named Brock’s Senior Citizen of the Year and, in 2014, the Brock High School library was officially renamed in his honour.

He became a Councillor of the Village of Cannington (1958) and Reeve (1971). He was elected the first Mayor of Brock Township (1974) and was a Regional Councillor, Durham Region. Allan ran as an NDP candidate in four federal and two provincial elections.

Allan’s commitment to fairness and public service has had a deep impact on many. He will be greatly missed by his family, friends, and community.

The family will receive friends at the Thorne Funeral Home, 109 Laidlaw Street South in Cannington (705-432-2672) on Friday, August 18 from 2:30 - 5 and 7 - 9 p.m. A memorial service will be held at Brock High School, west of Cannington on Saturday, August 19 at 1 p.m. followed by a reception at the Cannington Legion. In lieu of flowers, memorial donations may be made by cheque to the Cannington & Area Historical Society.